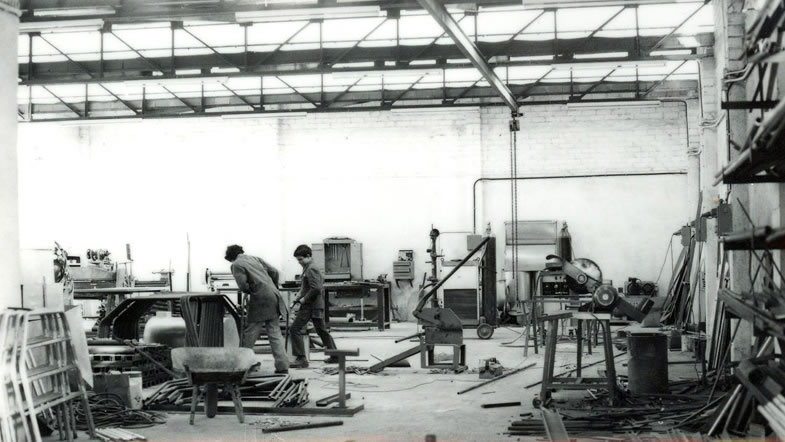 ERRA is 100% familiar firm which started in 1972 for its founder Toni Erra, who gives name to the firm. He began working in a garage in Manlleu manufacturing troughs and little tools for local farmers.

With work and effort, and with Miquel Palou’s incorporation and, later on, Imma, Toni’s wife, they built their first industrial building in Manlleu exclusively dedicated to manufacture cattle equipment. This was the main headquarter for many years. The working radius was then for La Plana de Vic, a purely traditional region in agriculture and livestock.
It was a gradual growth, increasing Manlleu’s industrial building in 4 stages. With Jordi Erra and Marc Erra’s incorporation, Toni and Imma’s sons, they expanded facilities in the industrial park of El Verdaguer and in Masies de Roda, letting arrive to customers from all over Catalonia.

In 1998, already with customers from all over Spain, ERRA joined its infrastructure to the current place in Vic. In 2013, it increased its installations with ERRA2 to open market worldwide.

This website uses cookies to improve your experience while you navigate through the website. Out of these, the cookies that are categorized as necessary are stored on your browser as they are essential for the working of basic functionalities of the website. We also use third-party cookies that help us analyze and understand how you use this website. These cookies will be stored in your browser only with your consent. You also have the option to opt-out of these cookies. But opting out of some of these cookies may affect your browsing experience.
Necessary Always Enabled

Any cookies that may not be particularly necessary for the website to function and is used specifically to collect user personal data via analytics, ads, other embedded contents are termed as non-necessary cookies. It is mandatory to procure user consent prior to running these cookies on your website.